September 6, 1901
Having an invitation by W.S. Fox to join a picnic party to go to Mt. Pleasant [Pleasant Mountain in West Bridgton] on Aug. 20th for blueberries, we arose at 4 a.m. to make preparations for starting for we were to meet the carryall two miles away, and while we were busy preparing lunch and attending to the numerous little chores preparatory to spending a day off, the good man was milking the cows and choring away at the barn.

A hurried breakfast and a "hurry up we are a half hour late." We spring to the buckboard and off to meet the rest. We near Sucker brook city and the black Fox has his wagon waiting for the horse and as we arrive at the Major's we find he has already left, and we jog along wondering if we shall be too late. We cross the brook and as we pass the next house and salute to the face at the window, "Aren't you going?" and receive the reply, "There wasn't room," we wished the old adage might be true, "There's always room for one more." ...

... A drive to the nearest farmyard and "Hello Oldin!" brings him and his wife from their bed while the man stables the horse and piles out pails and baskets to be gathered up as the carryall rumbles along with M.A. LeBaron as driver. ...and we slow up at Dan's for a final incoming of passengers and pails, baskets and lunches till all in as thick as peas in a pod, four seats three in a seat. The black Fox scoots by and we are off, a jolly party.

... Somehow before we reach the village [Lovell village] headgear got sadly mixed, and the men were seen going to the post-office and stores after tennis shoes to fit the ladies for climbing the mountain.

As we approached the photographic studio it was suggested we have our team photographed to sell to help build our library hall, but decided not to do so. Our ride to the foot of Smart's Hill was an uneventful one till we alighted for a walk when the black Fox captured the very fattest female in the crowd, whereupon the men commanded the rest of them to ride before anything might happen to them, which they were all glad to to do. As soon as the company arrived on descending ground the black Fox whisked by with his prey and was seen no more till the arrival at James Douglass' barn, where we began the ascent of the mountain.

The climb was slow with many stops for rest and affording an opportunity for viewing the landscape dotted with farmhouses as far as the eyes could see.

On arriving at the top of the first mount called Little Bald [perhaps called Bald Peak today?], the most nimble footed kept on to begin their labors, while the rest took more time for rest. At the spring in the woods more time was taken for refreshments and conversation. The next pull brought us near the berries but we kept on towards the top, where a beautiful view was to be had. A dim view of Portland harbor, the village of Bridgton Centre, Naples, and Harrison, many little hamlets and farms mingled in among the many lakes and ponds.

Nimble fingers were busy till four o'clock, when many pails and baskets were filled besides three kennebeckers ... preparation made for descent down the mountain. ... The descent was made with very little to break the monotony except a mistaken path and a sprained ankle by one upon mischief bent.

Quickly loading our berries we made the last clamber for seats and hastily donning our wraps to protect our heated bodies, of which you [sic] humble writer was made the butt of ridicule for covering her almost fleshless bones with a winter cloak, long shawl and numerous other articles of wearing apparel to keep the heat in instead of the cold out.

The ride home was made by the way of East Fryeburg. We passed many beautiful and well cultivated farms and salute many smiling faces as we passed along. Occasionally we encountered a dyspeptic mortal who could not relish a jest. ...

As we passed the dwelling at Frog Alley, lights began to appear at the windows and warned us that our views were ended for the day, but the songs and laughter were still as enlivening as merrily we rolled along to the village [Lovell]... A shout as we passed Fairview and the tired bodies began to long for home. A few miles more and as we near [sic] the schoolhouse we see the faithful son of one family who had waited three hours in the dark with team to convey the family home.

Altogether our day has been a pleasurable one, restful from the cares of home and marred not by growlers, each one feeling it a day long to be remembered.

[The column concluded thusly:] A party of thirteen from this place went to Pleasant mountain after blueberries on Tuesday, the 20th, and another of nine on the 23d. They all procured a lot of berries and had a good time.


From the West Lovell Town Column in the Oxford County Advertiser as reprinted in "The History of West Lovell" ed. Catherine Ingram Stone, published by the Lovell Historical Society, 2012, www.lovellhistoricalsociety.org

A coworker and I climbed perhaps this same peak in a quest for blueberries over one hundred years later. We went up Pleasant Mountain in Bridgton anyway. The crop was particularly bountiful. It had rained previously so there were small waterfalls along the trail. Our evening hike found us using flashlights to bring us down the trail to our cars. Even so, my return home was much earlier as there is now a road through Sweden and we have horseless carriages. 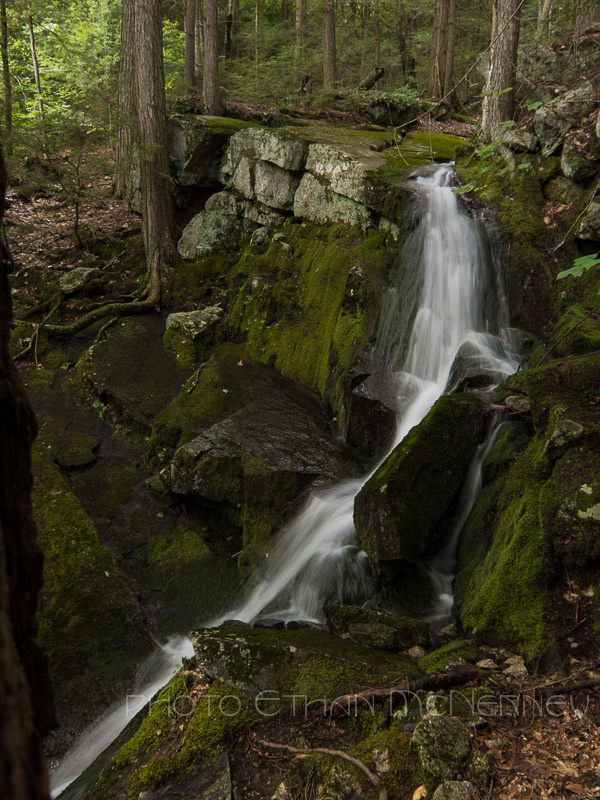 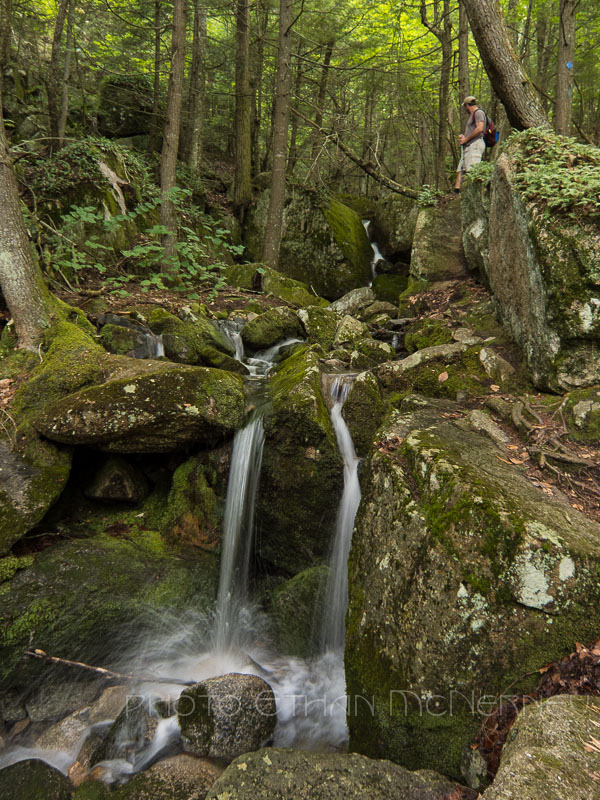 The Eye of the Needle: 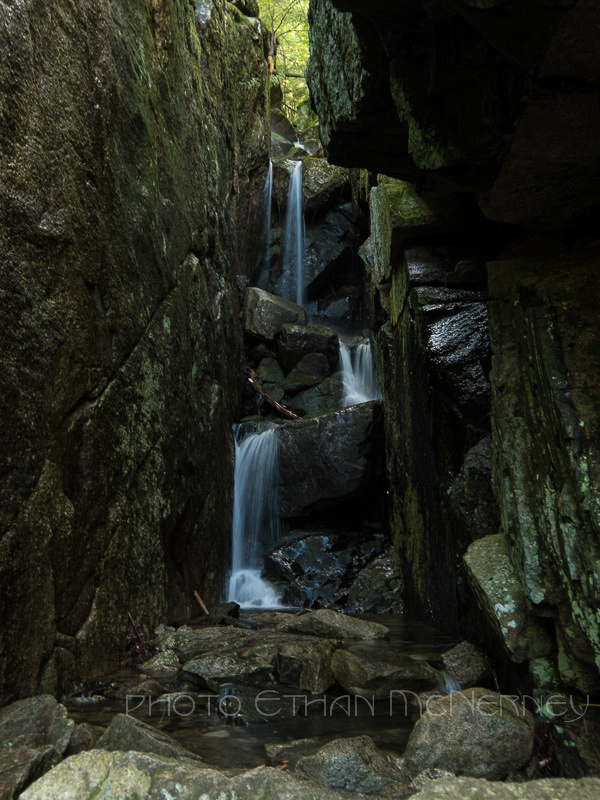 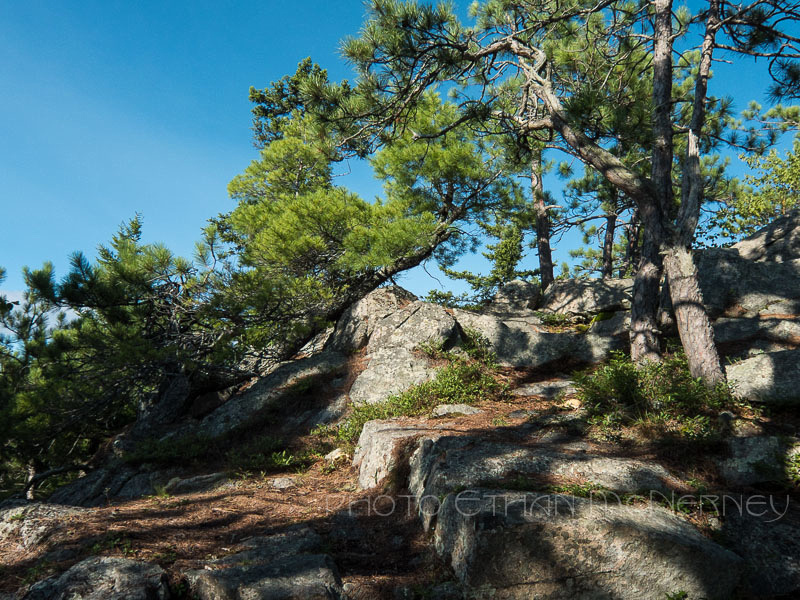 Realization of the goal: 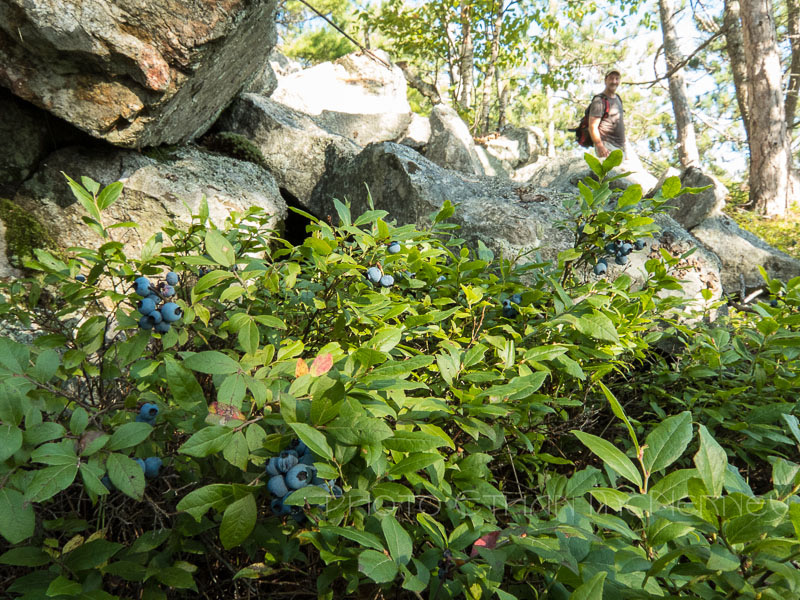 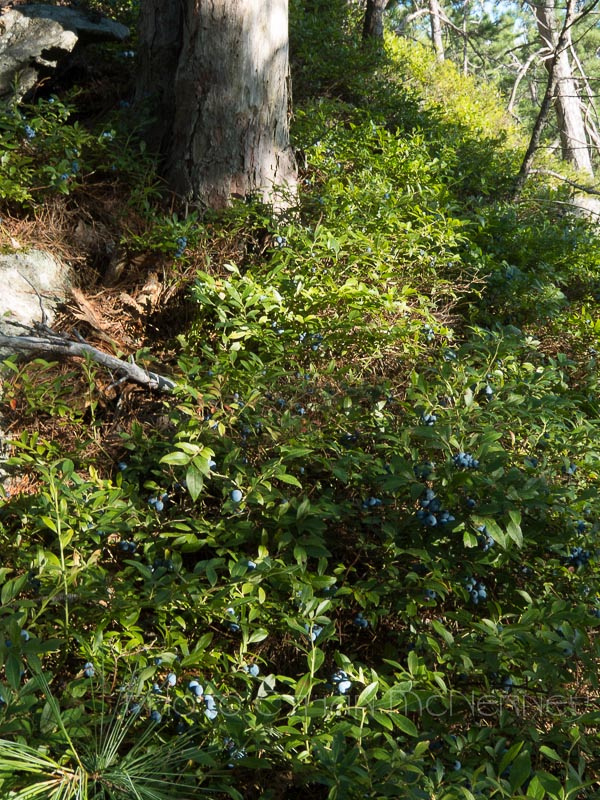 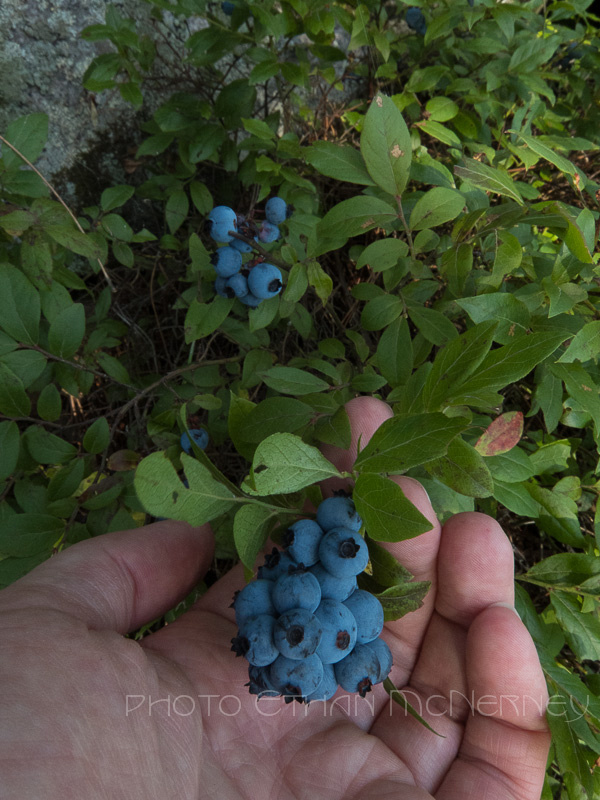 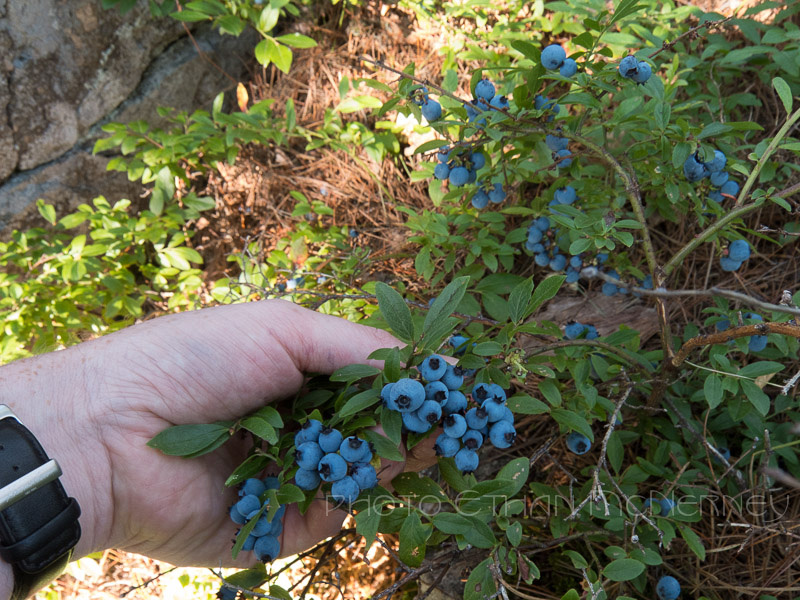 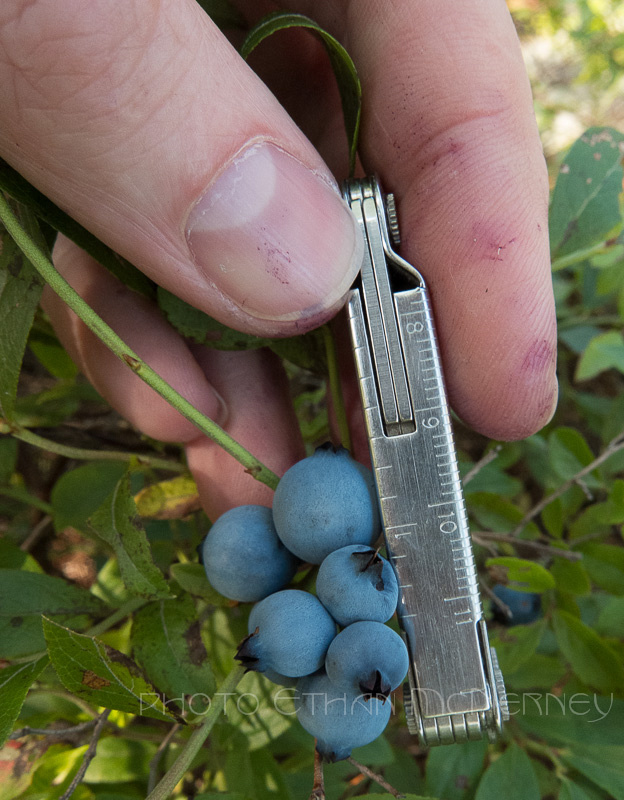 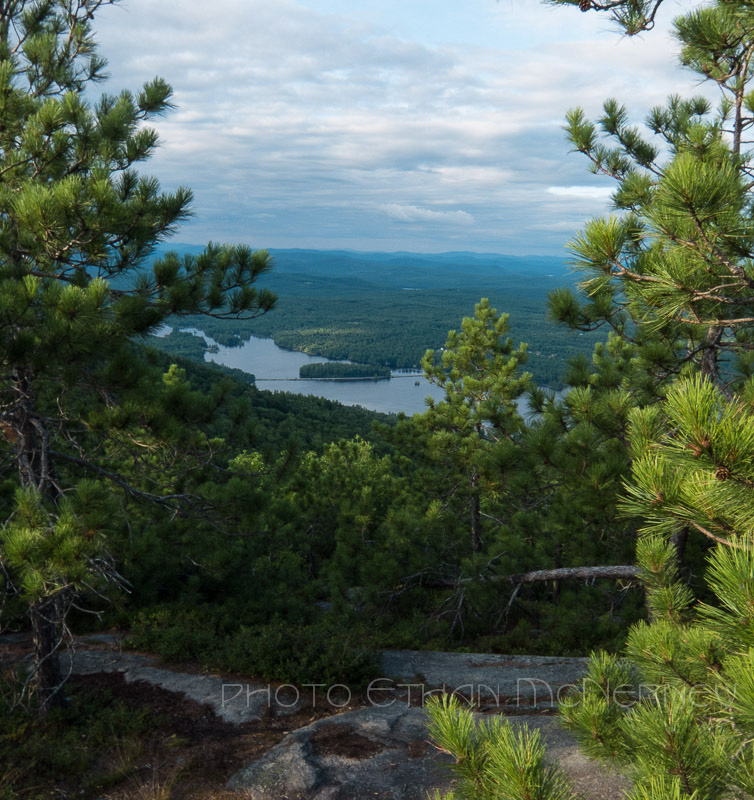 The causeway over Moose Pond in West Bridgton. It was partly constructed from stones taken from nearby stonewalls. 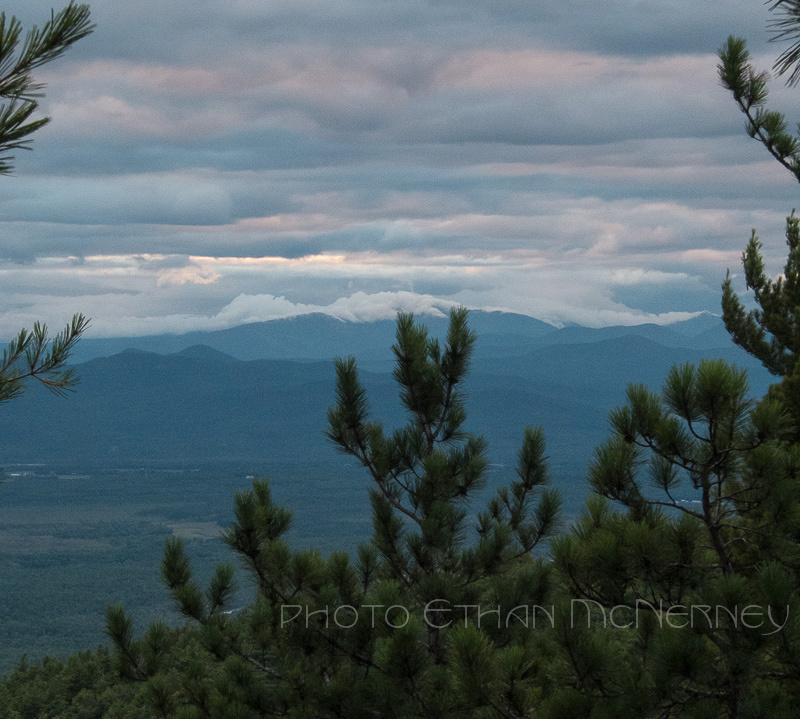 Clouds rolling in over Mount Washington. 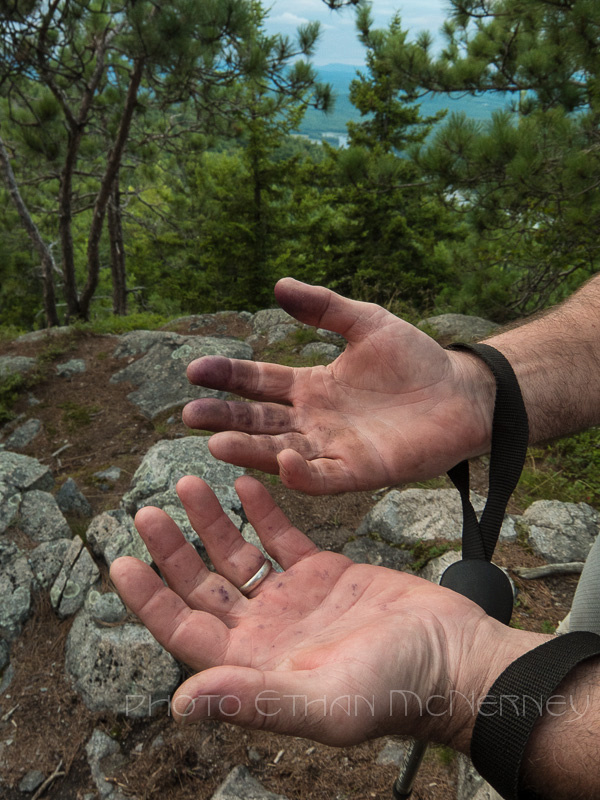 All photos taken with the Fuji XF-1 in RAW format and processed in LR.

Ethan McNerney Photography
Thank-you, glad you liked it. My father had been reading the History of West Lovell book and had mentioned this story. When I went for this hike I was reminded of it and had to read it for myself. Let's see how the blueberries will be this summer.
MeadowMama(non-registered)
I really enjoyed this post! Beautifully aranged,and the beginning story a delightful introduction to your own escapades! The forest looks magical and the blueberries enchanted! I imagine fairies hiding among the moss covered rocks and dancing in the mist from the falls!
sage(non-registered)
Those blueberries look scrumptious!!! And what a beautiful place to find them!

Really enjoyed the entry from 100 years ago, in contrast to your adventure. Very nice entry, Ethan.