There was no neighbor for ten or fifteen miles on either side of me. The river twisted down in long curves between narrow bottoms bordered by sheer cliff walls, for the Bad Lands, a chaos of peaks, plateaus, and ridges, rose abruptly from the edges of the level, tree-clad, or grassy, alluvial meadows. 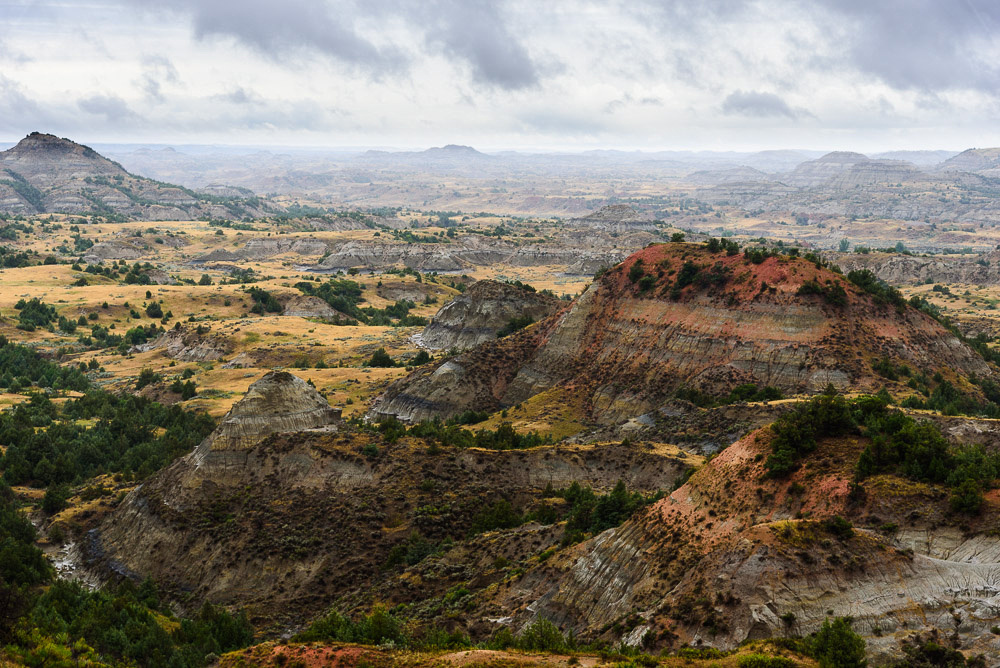 This view of Painted Canyon may be the first sight a visitor gets of President Roosevelt's Badlands. It is the rest area exit along I-94 in western North Dakota.

It was still the Wild West in those days, the Far West, the West of Owen Wister's stories [author of The Virginian] and Frederic Remington's drawings, [he and Mr. Roosevelt were to collaborate on a book of this country] the West of the Indian and the buffalo-hunter, the soldier and the cow-puncher. That land of the West has gone now... It was a land of vast silent spaces, of lonely rivers, and of plains where the wild game stared at the passing horseman. ... In that land we led a free and hardy life, with horse and with rifle. 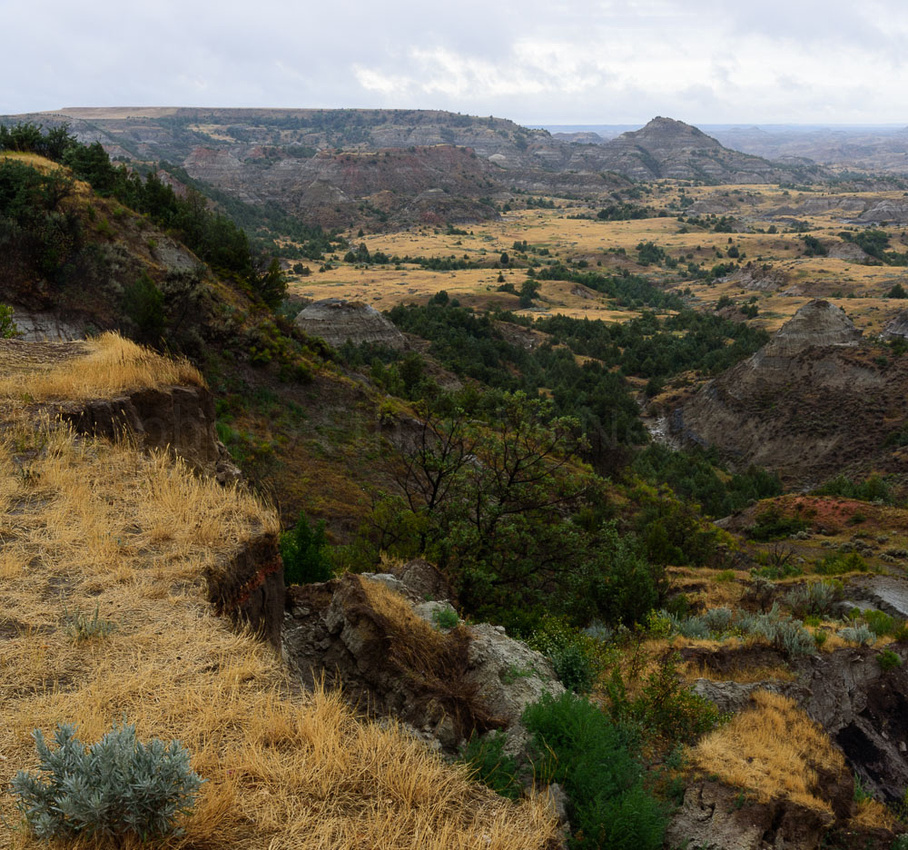 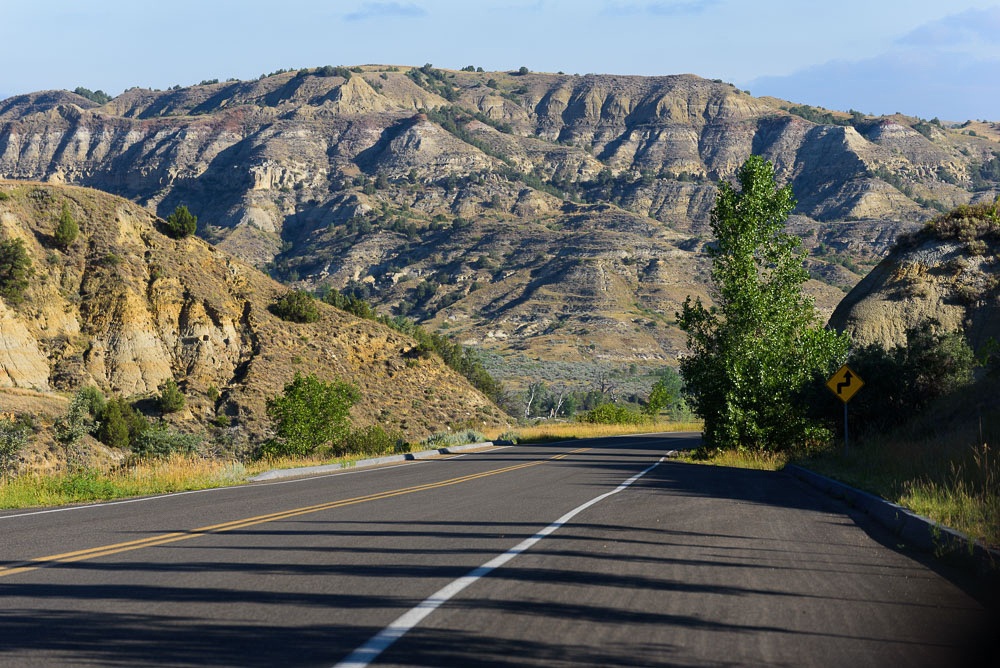 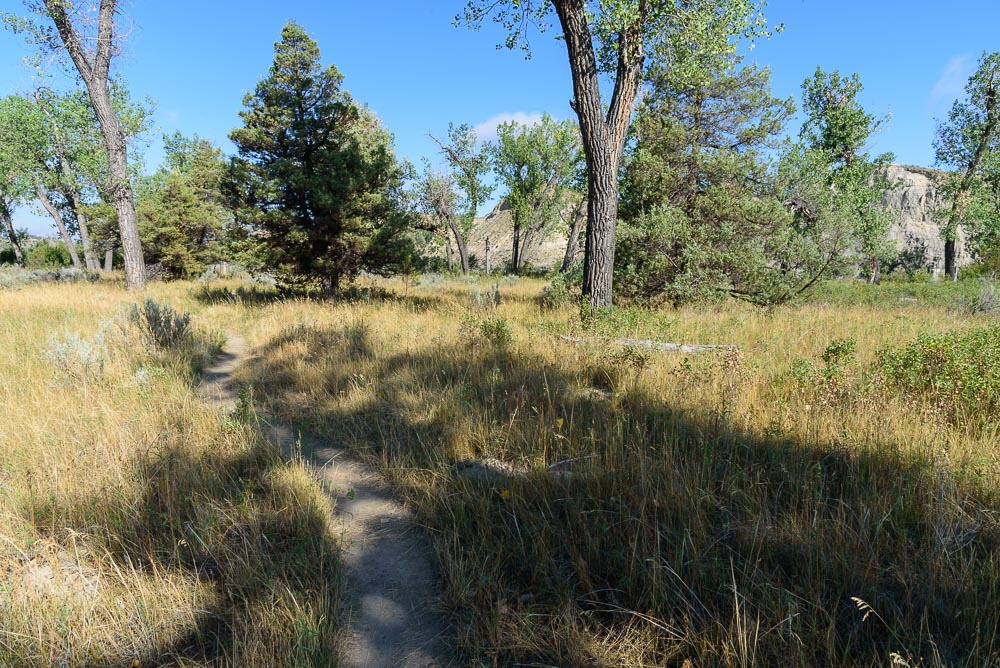 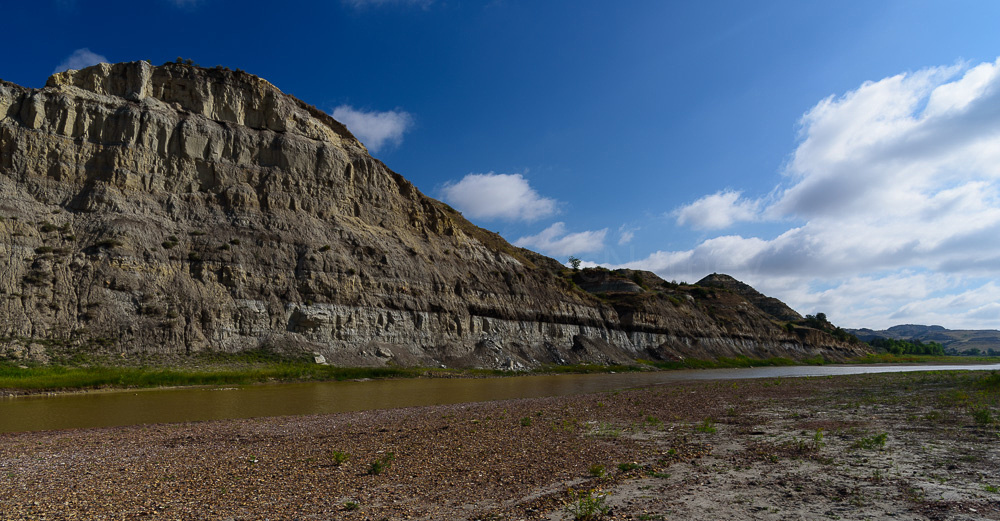 The Little Missouri River, low in the dry of mid-summer. In my mind's eye, I was imaging the young man who was to be President fighting this river in icy winter to track down a couple of cattle thieves who had stolen his boat.

The river twisted in every direction, winding to and fro across the alluvial valley bottom, only to be brought up by the rows of great barren buttes that bounded it on each edge. It had worn away the sides of these till they towered up as cliffs of clay, marl, or sandstone. Across their white faces the seams of coal drew sharp black bands, and they were elsewhere blotched and varied with brown, yellow, purple, and red. This fantastic coloring, together with the jagged irregularity of their crests, channeled by the weather into spires, buttresses, and battlements... As it grew dusk the shadowy outlines of the buttes lost nothing of their weirdness; the twilight only made their uncouth shapelessness more grim and forbidding. ... All through the early part of the day we drifted swiftly down between the heaped-up piles of ice... In ... places the ice-walls were sometimes eight or ten feet high...

-Ranch Life in the Far West, "Sheriff's Work on a Ranch," Theodore Roosevelt, 1888 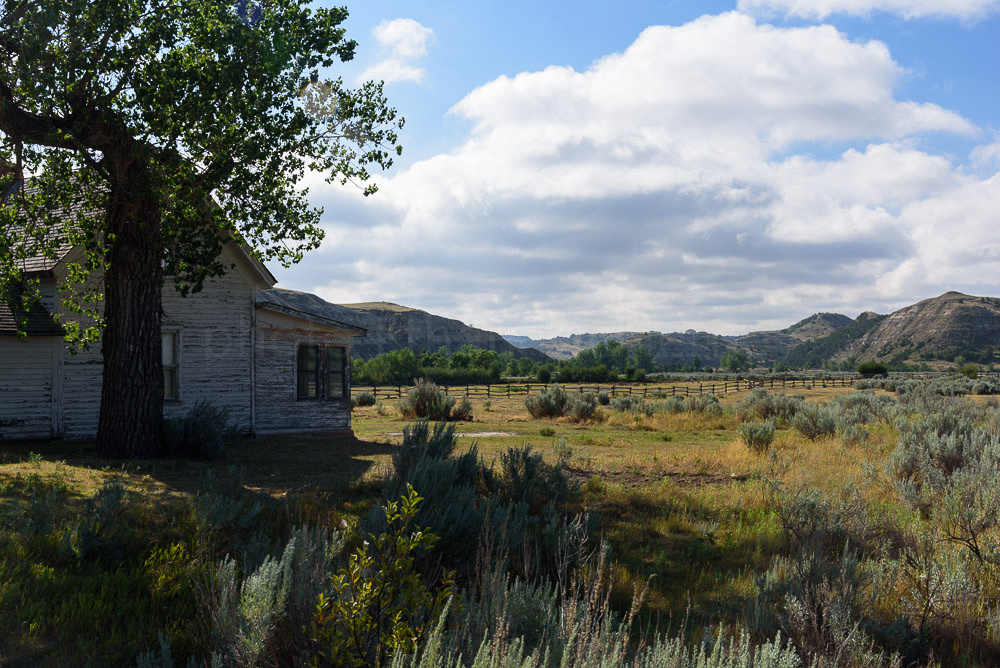 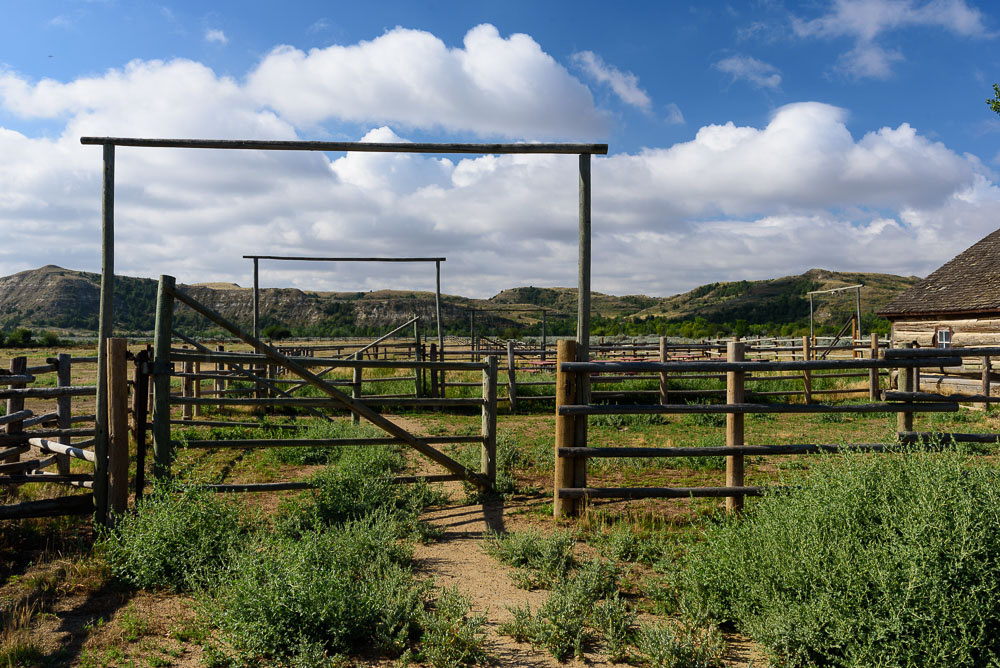 Until recently, the NPS had horses for visitors to ride in this corral. 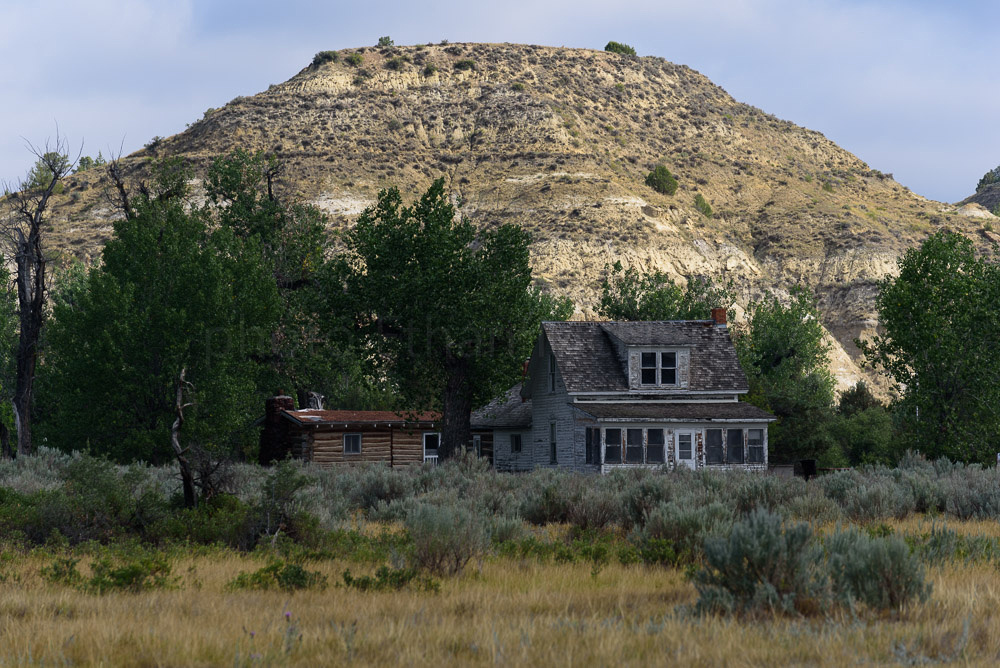 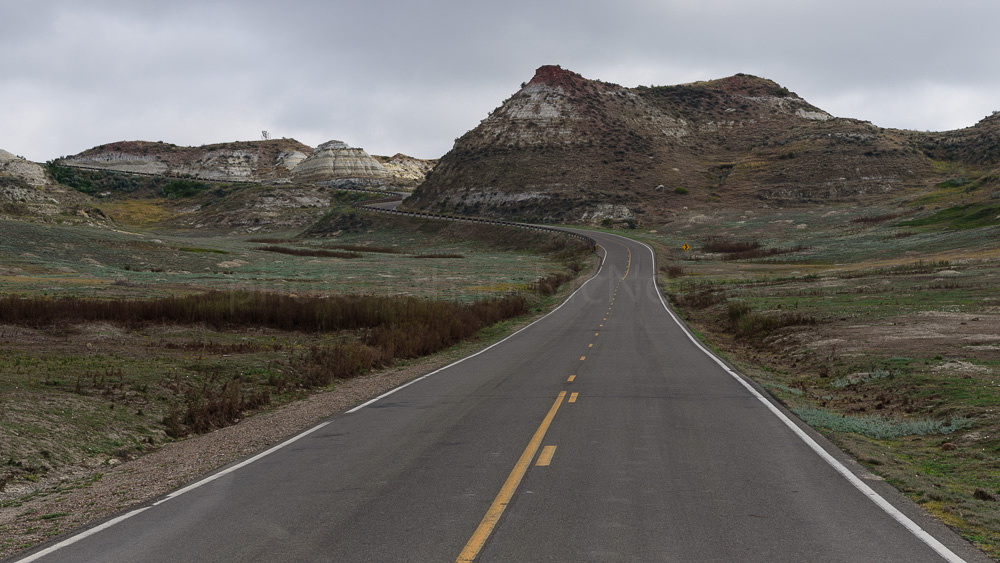 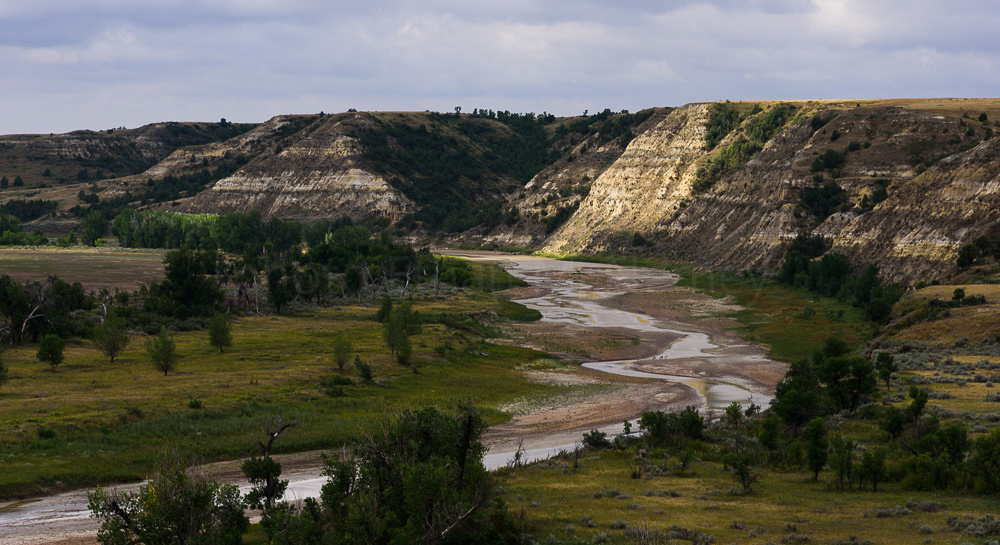 There are pronghorn down there along the Little Missouri. 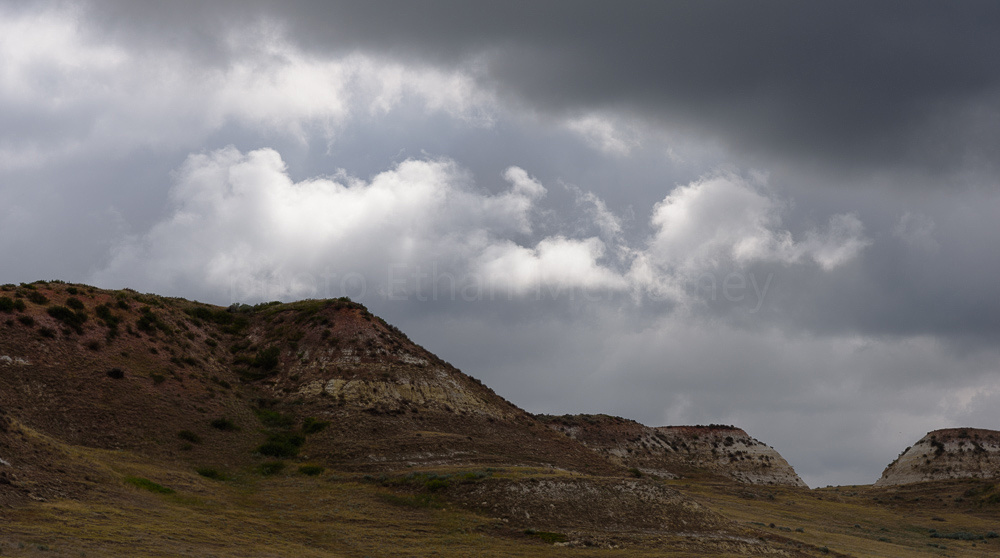 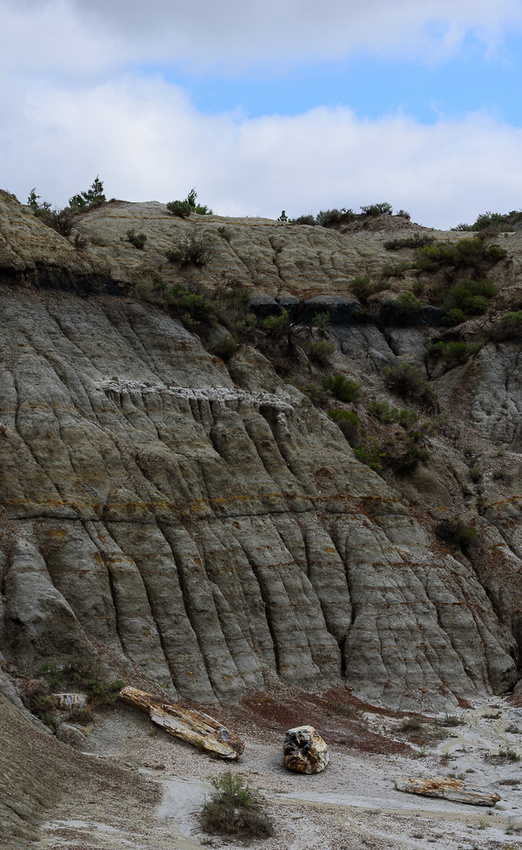 A petrified log exposed at the bottom of a bluff. 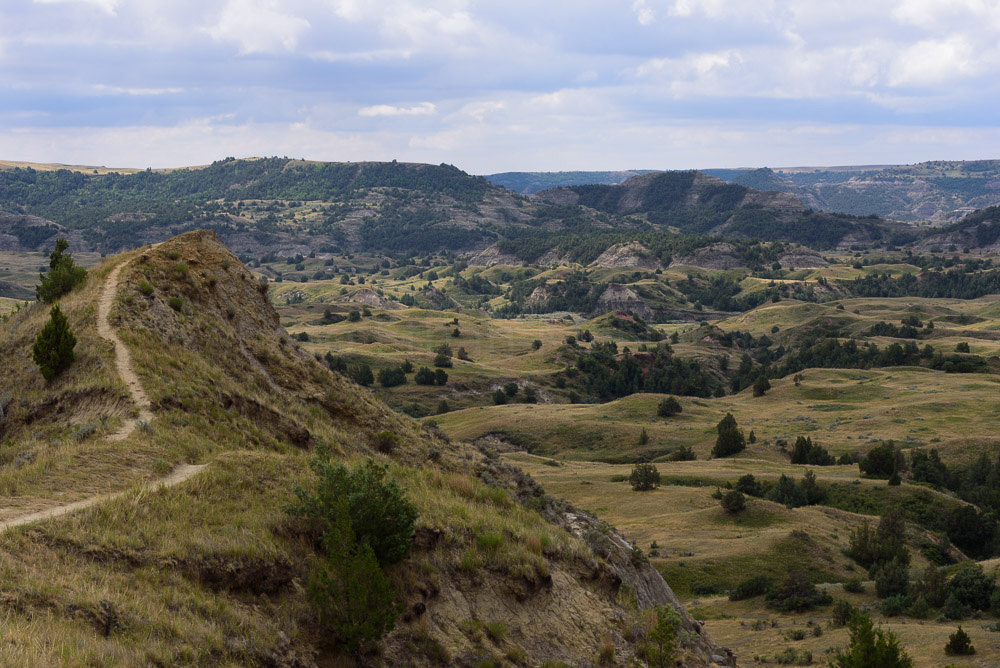 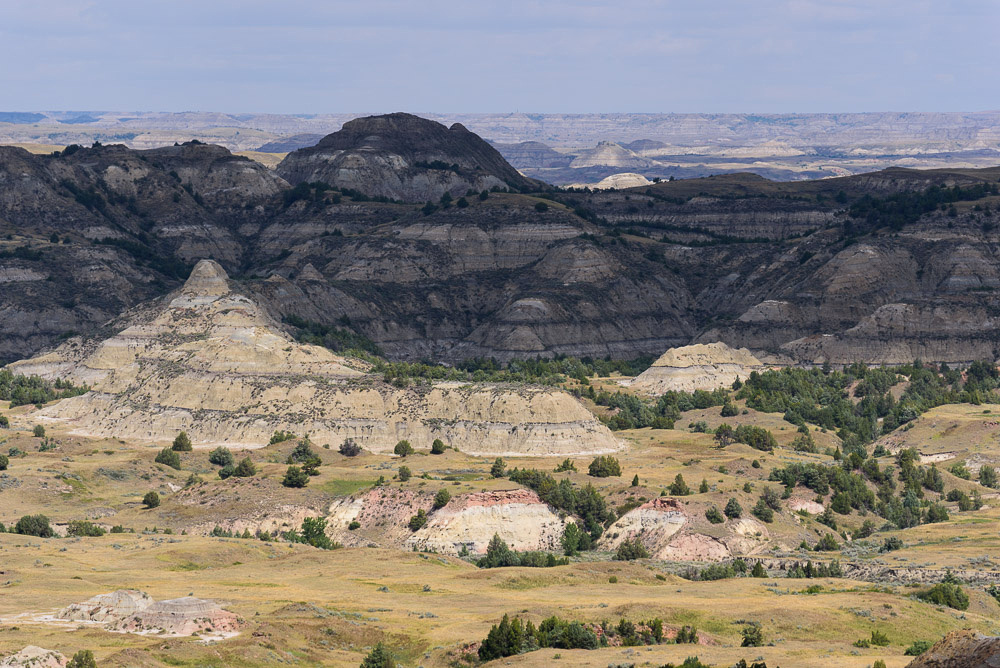 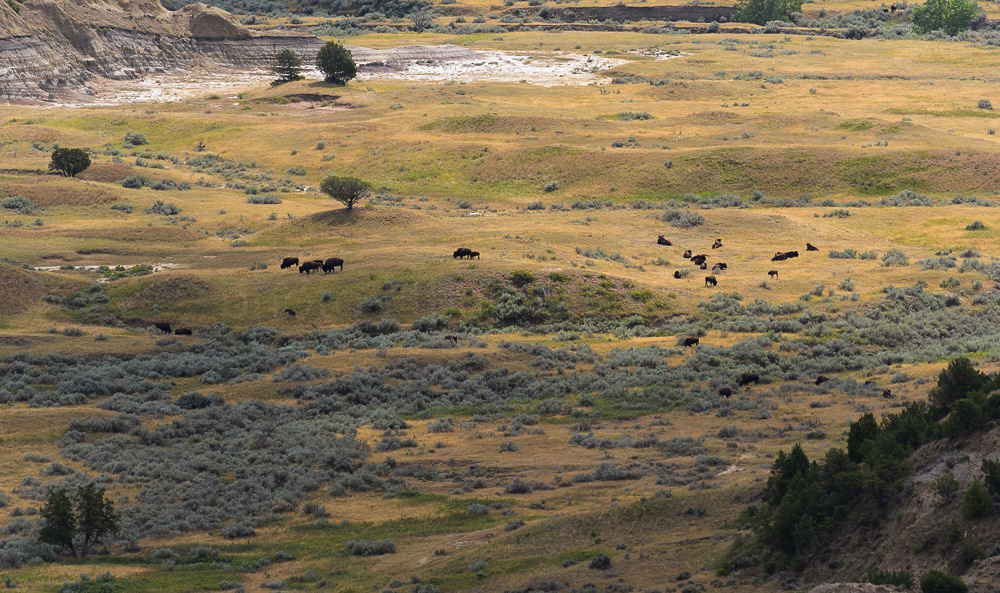 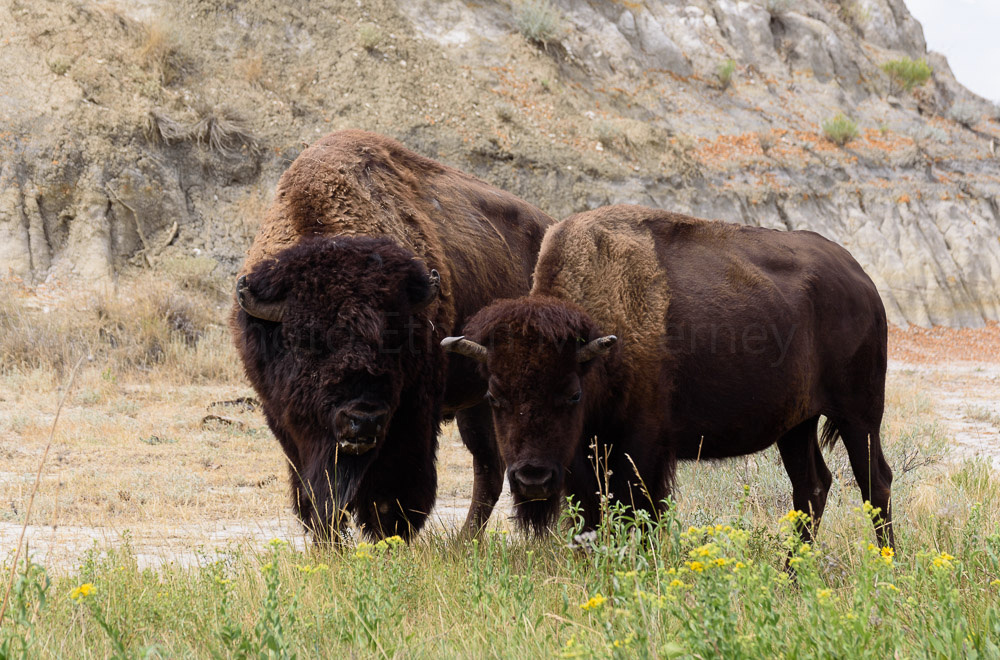 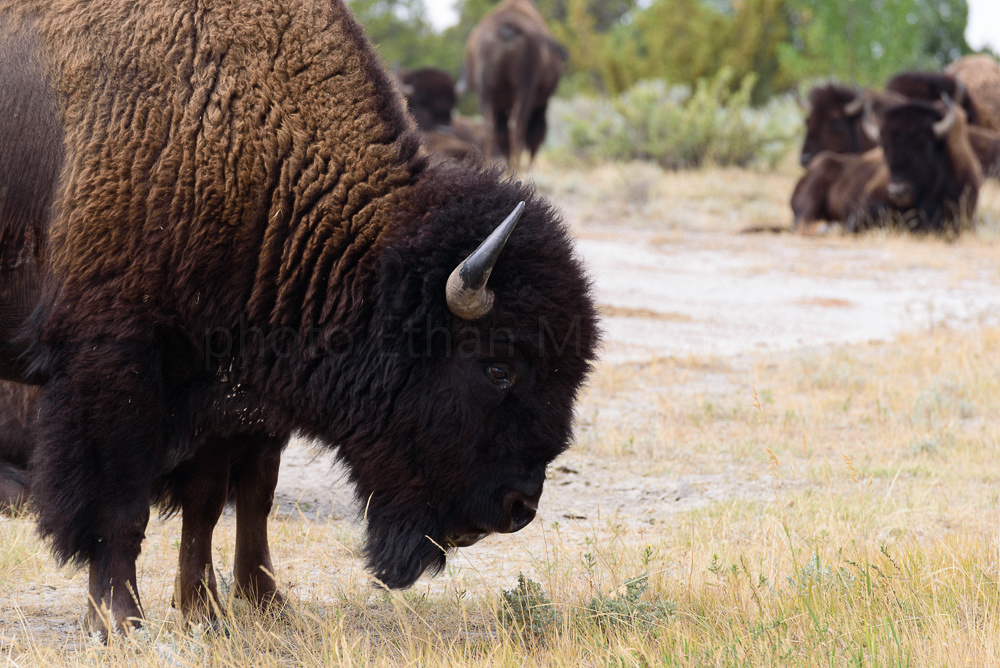 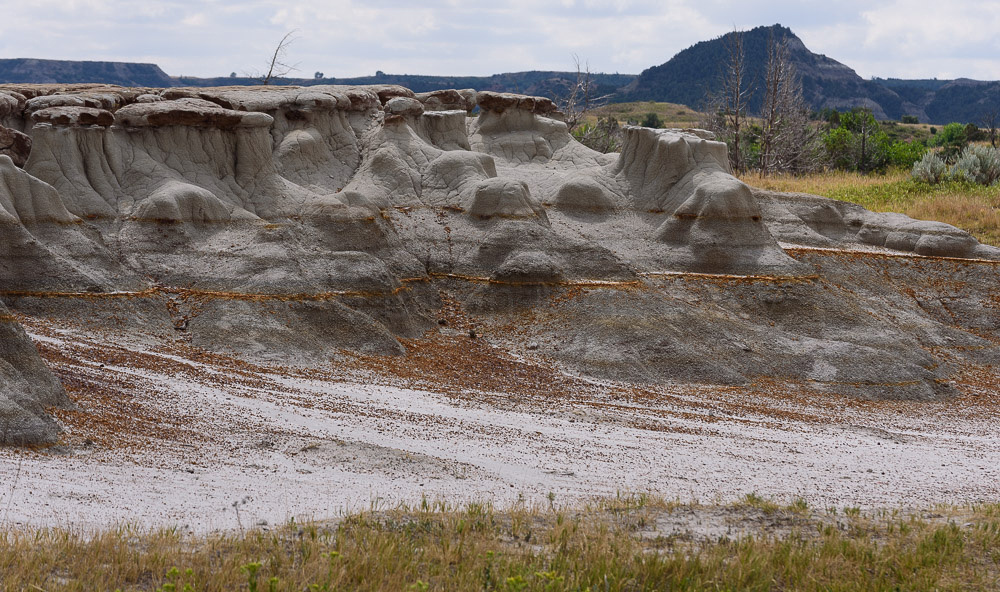 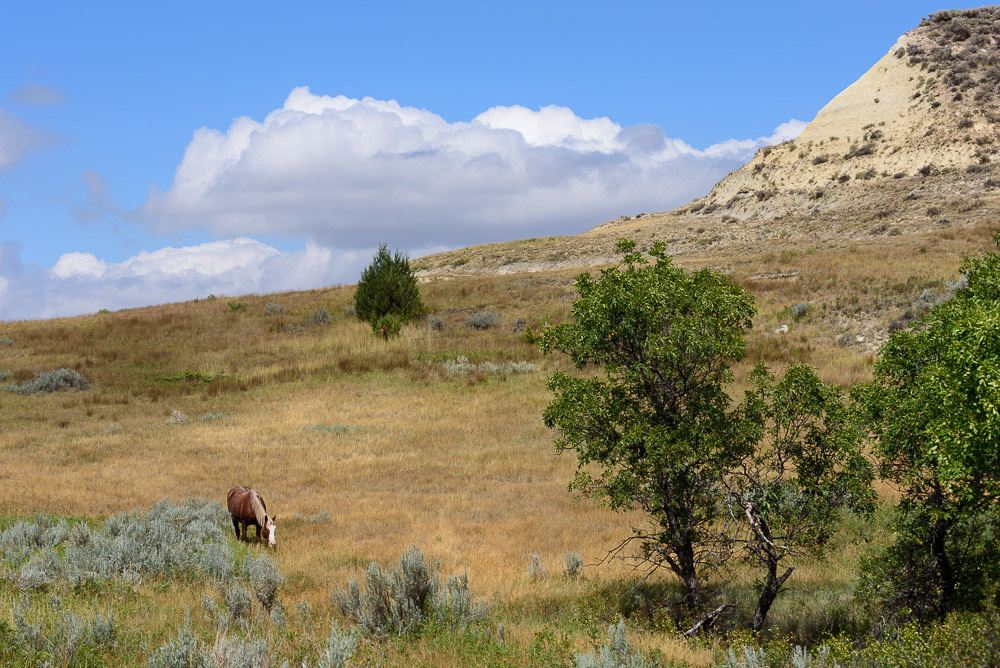 Every outfit always has certain of its horses at large; and if they remain out long enough they become as wild and wary as deer and have to be regularly surrounded and run down. ... The horses shift for themselves and need no help.

Perhaps a descendant from President Roosevelt's own string of horses? When the ranching days seemed to be ended, the cowpunchers' horses were left to roam. 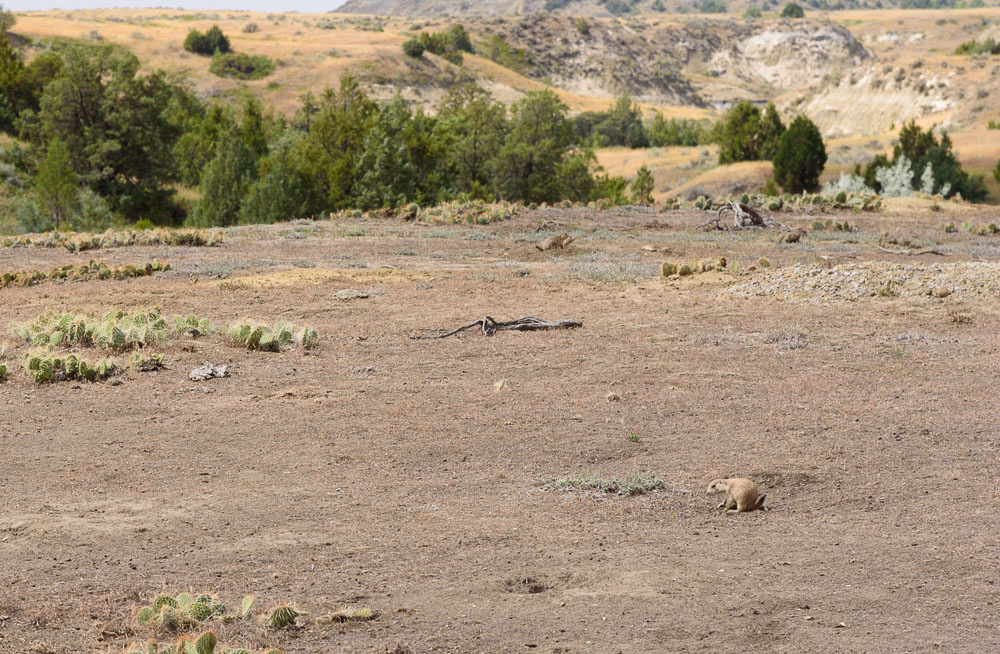 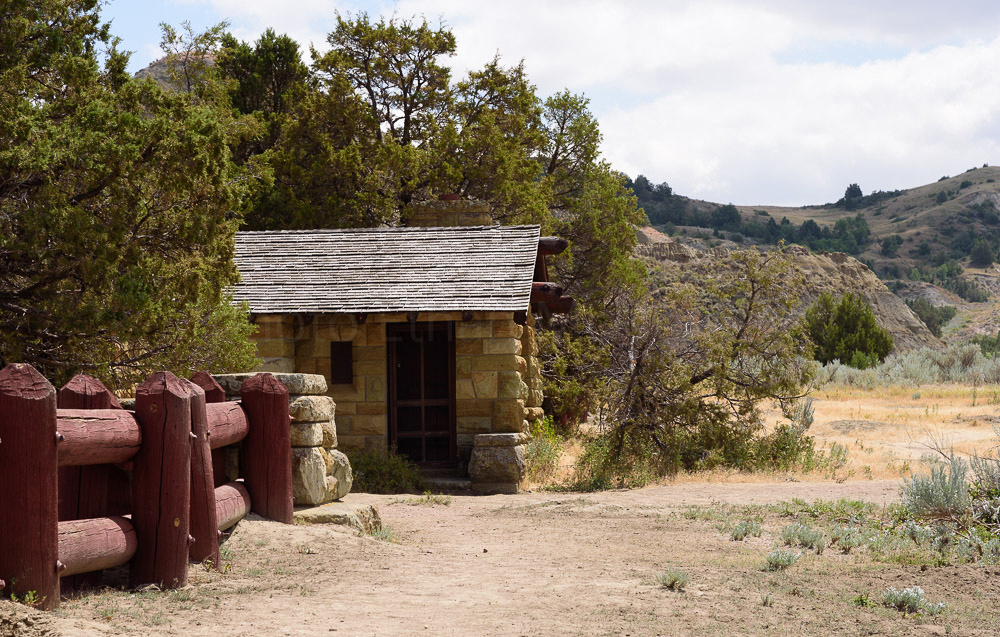 The old entrance gate to the park, now with paved roads only visible in the distance. 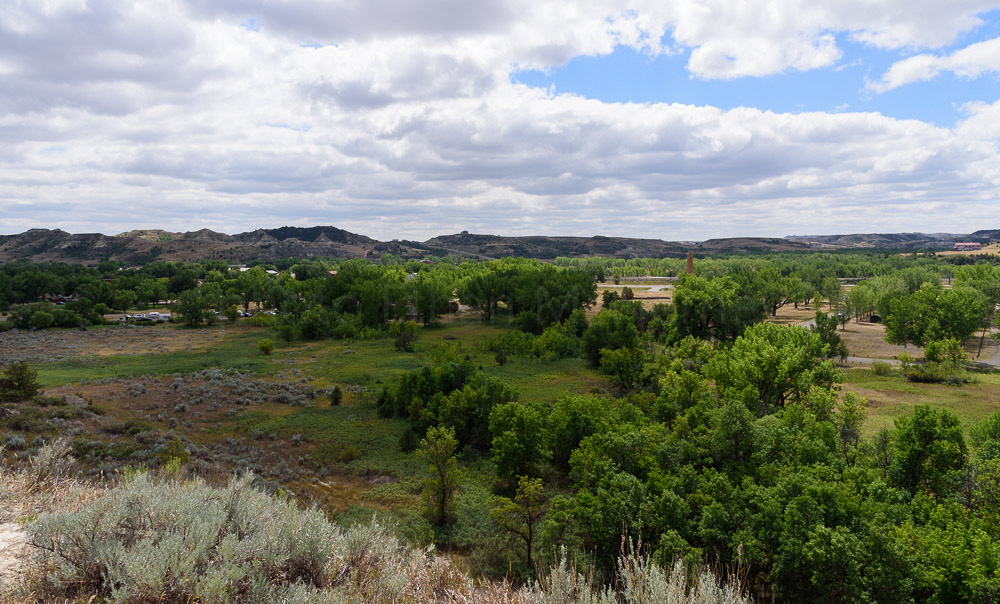 The town of Medora with the Marquis de Mores' ranch (Chateau De Mores) on the bluff to the west. 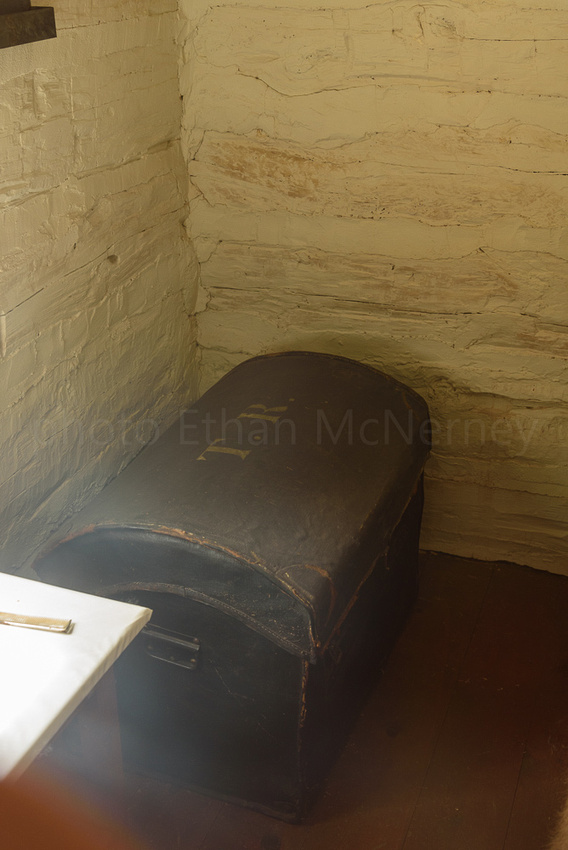 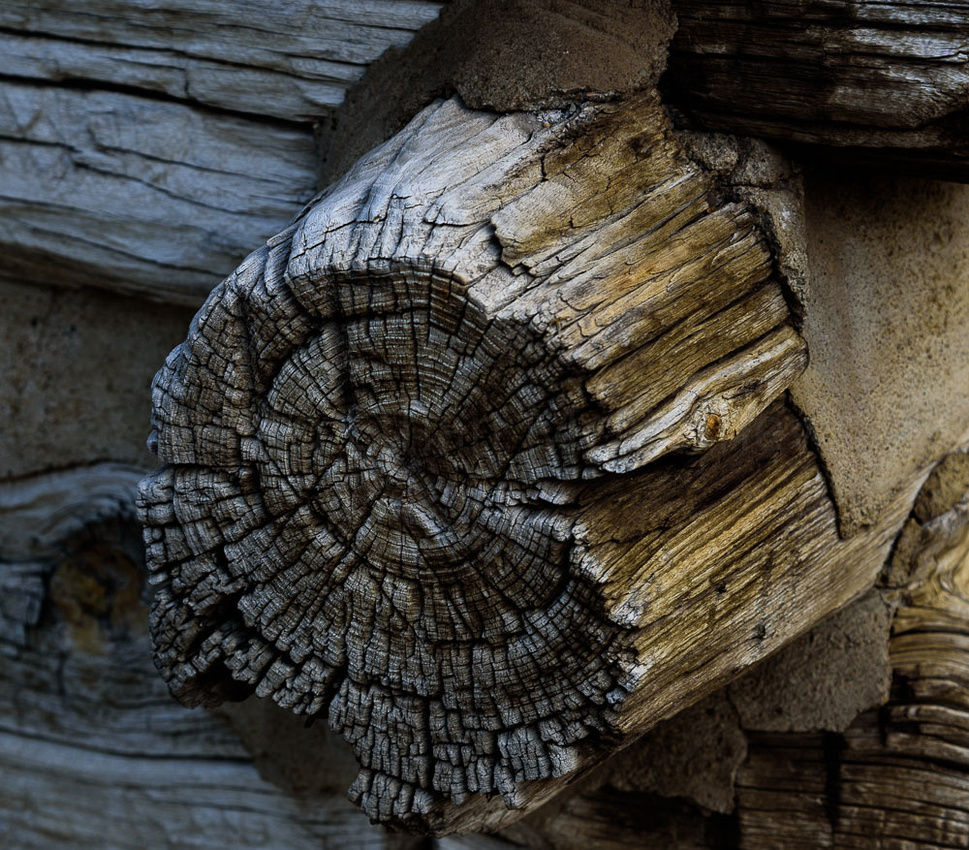 The Maltese Cross brand impression on the end of one of the logs in the President's cabin.

This was a quick tour of the Theodore Roosevelt National Park, South Unit, from my western trip in the summer of 2017. Previously I had visited the North Unit, but I still hope to return and visit the other ranch site. It is a beautiful, rugged country that helped make the man who would become President of the United States. 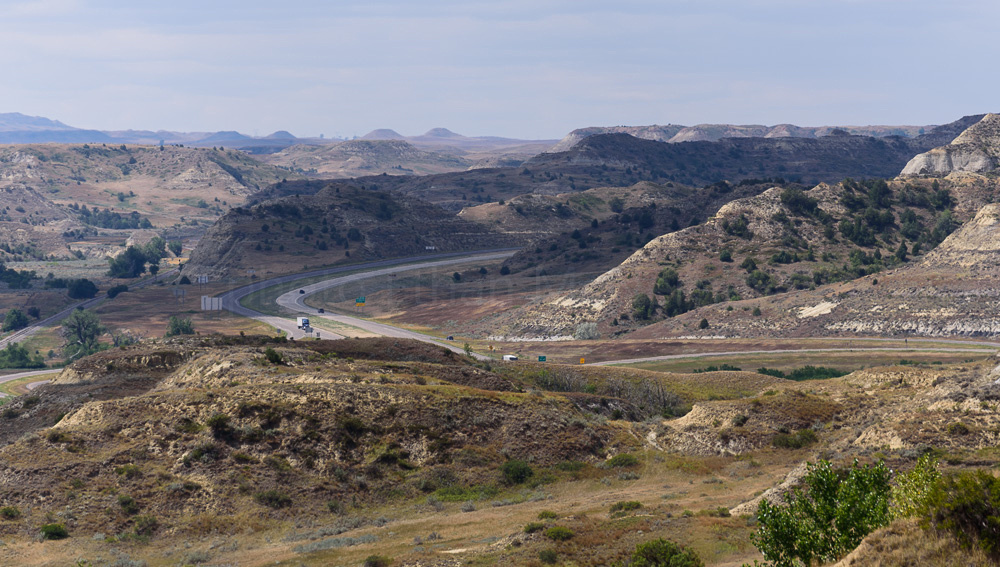 Looking down on I-94 from a viewpoint in the park.